Our friend Wilbert, from Corwen Nursery

We spoke to Corwen day nursery to find out about the amazing impact Wilbert the dog has had on the children in their care.

Wilbert is a Dachshund (sausage dog), which is a small, hypoallergenic dog known for having a gentle temperament. He’s loving, loyal and is a great companion for the children. He was introduced to the nursery as a puppy in October 2021, which means the nursery is all he’s ever known.

He belongs to Sophie, one of the staff members at the nursery and visits every day. Sophie always makes sure he’s there to greet the children in the morning, which creates a great atmosphere.

He’s great with the children and allows them to consistently play and stroke him. He loves spending his time with the pre-school children (aged three to five) by playing outside, going for walks and taking part in their activities.

Some of the benefits Wilbert has brought to the children is that it’s helped them learn life lessons. They’ve learnt that dogs need caring for, the importance of hygiene, boundaries and how to be gentle.

Wilbert has become the nursery’s therapy dog and is instrumental to the children’s well-being. He comforts those who are sad or upset and loves to be cuddled. One child was very anxious about meeting Wilbert as she wasn’t a fan of dogs. Since getting to know Wilbert, she’s like a different child, she plays with him and he sits on her lap.

There is a child with selective mutism, which is a severe anxiety disorder where she’s unable to talk in certain social situations. The staff often find her talking to Wilbert and are amazed by the increase in her self-confidence around him.

Wilbert’s presence creates a great atmosphere in the nursery and he has become part of the nursery’s family. 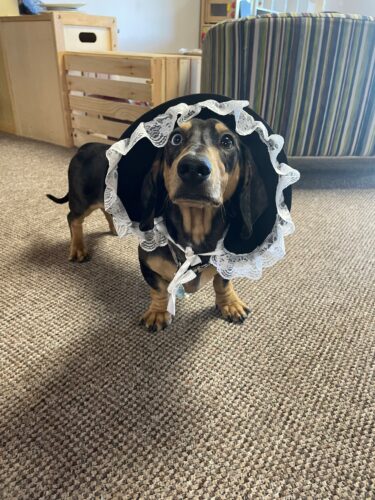 Previous story Back to news Next story